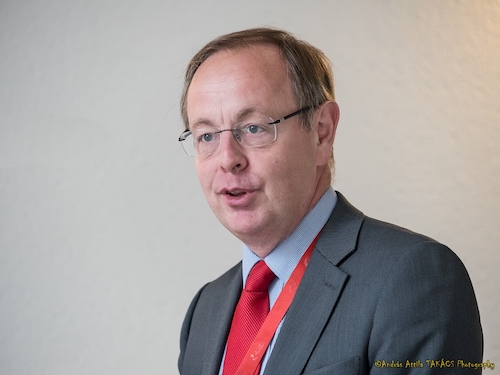 Patrick CHILD is currently Deputy Director-General in DG Environment at the European Commission with particular responsibility for the EU’s zero pollution strategy, chemicals legislation, research and innovation for environment and communication.

From 2016-2021, he was Deputy Director-General in DG Research and  Innovation (R&I) at the European Commission. As member of the Board of DG  R&I, he followed in particular research and innovation in clean energy and  climate technologies as well as the R&I dimension of the post-COVID recovery  and resilience strategy and Horizon Europe mission on Cancer. His international  roles included Commission representative and chair of the steering committee of Mission Innovation (a coalition of 24 countries and the EC working to accelerate  global clean energy innovation) and lead co-chair of the Group of Earth  Observations (GEO).

Until April 2016, Patrick Child was Managing Director of the European External  Service with responsibility for administration and finance, covering human  resources policy, security and the budget. Before he took up this post in 2011,  he was director in the EC External Relations Directorate-General in the  responsible for managing the network of Commission delegations. He has  previously served as head of cabinet for External Relations Commissioners  Benita Ferrero-Waldner and Chris Patten.

With a background in the UK Finance Ministry, he joined the European  Commission in 1994, where he started in the Economic and Monetary affairs  Directorate General before becoming Commission press spokesman for  economic and monetary union from 1995-1999. Mr Child studied mathematics at Cambridge University.